The first openly gay actor to have worked in Hollywood was silent film superstar William Haines.  Haines’ staunch refusal to hide his homosexuality, or to deny his relationship with his life partner, set a true precedent still felt today and in conjunction with today’s Queer Film Blogathon hosted by Garbo Laughs, it felt right to take a look back at Haines’ historical importance.

The handsome, witty Haines was one of MGM’s hottest properties of the 1920s and a consistent top box-office draw into the early 30s. But when Haines was arrested for picking up a sailor in downtown Los Angeles, Louis B Mayer was quick to squelch the scandal.  Mayer ordered Haines to choose: it was either MGM or his new lover, Jimmy Shields. Haines’ love and loyalty for Shields cost him his film career: he was promptly dropped from MGM and was Doom-Booked by the Hays office.

But Hollywood’s loss was, well, Hollywood’s gain. The indomitable Haines, who was already chummy with such influential designers as Orry-Kelly, became its resident celebrity interior designer du choix.

The social constructs of homosexuality were not what they were today … it took courage to refuse to play the Hollywood game of arranged marriages and photo-op dates (Anita Page notwithstanding). There was no gay movement in 1930, no political imperative to identify in the public arena as homosexual. While Billy Haines might have refused to take seriously publicity linking him to Pola Negri, he also never introduced Jimmy Shileds to the pages of Photoplay. Such was simply not part of the social consciousness of the time. Yet he lived a completely authentic life. In the more permissive days of the 20s and early 30s, being homosexual was simply something that was— at least in Hollywood. There might have been no such animal as a “public identity” of a gay man in those days, but Billy Haines came close. He was a man perfectly suited for his times.

I recently re-visited some of Haines’ most popular films (Show People, Spring Fever) hoping to settle on symbolic sub-text to really sink my teeth into.  (Haines’ looking up Crawford’s skirt in Spring Fever was a strong contender.) I decided, however, to simply share this great moment from the Hollywood Revue of 1929.

It is a choppy, short little sketch in a film entirely comprised of choppy, short little sketches, during which Haines quite literally rips Jack Benny’s shirt off. Hardly classic comedy, but a ripe example of the exuberance that made him so  popular among his friends and suggests the unapologetic sense of self-assurance that allowed him to live his life, as Mann put it, “by rules of his own design. And that, in Hollywood, is extraordinary enough.” 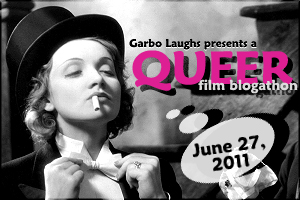 12 thoughts on “His Way: William Haines”