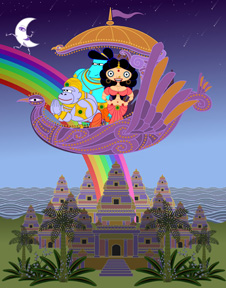 1920s jazz chanteuse Annette Hanshaw hasn’t had this much press since … well, the 1920s. Nina Paley’s feature length animated feature, Sita Sings the Blues, has become something of a critics darling over the past few months during its search for a distributor, only to find itself in copyright purgatory. Paley’s film is an animated version of the Indian fable Ramayana set to a soundtrack of vintage Annette Hanshaw recordings. According to critics the result is a spectacular visual feast–Roger Ebert being a particularly vocal supporter of the film. Unfortunately, you and I and the rest of the world’s weary wage slaves will probably never see it due to an intellectual property battle over the licensing Hanshaw’s music. According to QuestionCopyright.org, “although the recordings are out of copyright, the compositions themselves are still restricted. That means if you want to make a film using these songs from the 1920s, you have to pay money — a lot of money (around $50,000.00).” It’s not a simple matter of giving the film a new soundtrack because, according to Paley, Hanshaw’s music is what inspired the film and the scenes are built around it. (I mean, try slapping a non-Beatles soundtrack to the Cirque du Soleil’s  Love.) Nina Paley’s blog expains in detail how she plans to go about getting the funds necessary to get Sita out of copyright hell.
Thoughts anyone? Is Paley’s film a victim of the big bad wolf or should she just simply have just known better?

One thought on “Sita Sings the Blues—and gets her mouth duct-taped.”