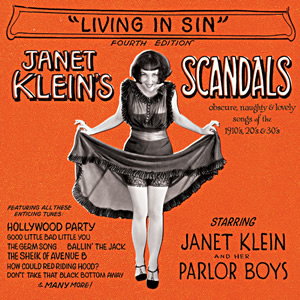 I heart Janet Klein because she’s no gimmick:  this  Southern California native is the genuine article. A neo- flapper who has brought to life the all but forgotten sound of early 20th century music in the most extraordinarily authentic way. It is a feat that is possible only because she happens to be consummate authority on all things jazz age. A self-described archaeologist of sorts, Klein unearths forgotten recordings of yesteryear and sets them to a fantastically vintage hot jazz sound. Proof of her historical pudding can be found in her website, which is chock-a-block full of, not only information about her band, but those artists of yesteryear that she so strikingly emulates. Vintage photos of past greats like Ruth Etting bombard the site’s ‘Vaudeville Closet,’ she has an in-depth links page for everything from ukulele music to Annette Hanshaw to historical societies and and you can also sample tracks off of any of her four albums. The site itself is designed with all the swirling eccentricity of Toulouse Lautrec and the femininity of a Gibson Girl –not to mention it’s a heck of a lot of fun to just, well, waste your time on. (how often does that happen nowadays?)

If you’re a local Los Angelino, you can catch Janet live at an upcoming performance at Maxwell DeMille’s Club Cicada here in Los Angeles. For everyone else? iTune it!