January 6, 1939: Ask a Policeman. Directed by Vincent Marcel and owned completely by actor Will Hay, this classic (and in my opinion, eponymous)British comedy was released 70 years ago today, January 6 1939. Hay worked the Karno comedy circuit in early 1900s England with the likes of Charlie Chaplin and Stan Laurel and it is this 1939 role as Sgt. Dudfoot that has immortalized him. The plot is simple enough: a policeforce is 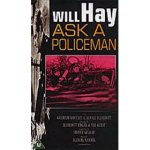 suffering in a sleepy English town that hasn’t seen a lick of crime for over a decade. In an attempt to stir things up by staging a crime, Sgt. Dufoot and his colorful cohorts uncover the genuine article: a smuggling ring…and a headless horseman.