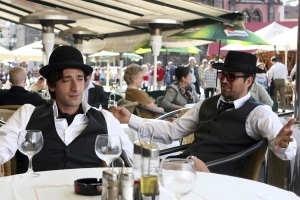 This capriciously offbeat sophomore offering from director Rian Johnson (whose film Brick is an inarguably brilliant must-see) starts off in the tradition of good old-fashioned Hollywood screwball sillies. Rian Johnson’s The Brothers Bloom has charm and charisma and plenty of promise with its premise. Two brothers who have spent their lives telling stories as con-men are in pursuit of two very different endings: the elder (Mark Ruffalo) in search of the perfect con and the younger (Adrien Brody) in search of a life free of his brother’s scripted bondage. Toss in a highly eccentric heiress (the excellent Rachel Weisz) as their final mark and a mysteriously sexy assistant known appropriately as Bang Bang (Runko Kikuchi) and you’ve got a recipe ripe for some terrifically offbeat cinema. And for the most part, Brothers Bloom is indeed a sassy, smart screwball of yesteryear–unpretentious, sweet and delightuflly outrageous. The problem is that Johnson doesn’t stick with his own formula and allows the film to convolute itself into an anti-climactic melange of plot hoops and hurtles that are meant to be clever, but by the limping third act, end up robbing the film of the magic it was oh-so close to conjuring.